If you want to smile, watch this: http://www.youtube.com/watch?v=ts_4vOUDImE

Google and Coca-Cola teamed up to deliver this awesome global campaign, which was a re-invigoration of classic hilltop commercial.   Of course, the messaging was incredibly well aligned to the brand, but I also liked how the power of our modern digital technologies were highlighted.  Watch the video here:  http://youtu.be/45Z-GevoYB8

This campaign, like one of my other favorites (Coca-Cola’s interactive vending machine on the India-Pakistan border), utilized technologies to create consumer/brand experiences that would not have been otherwise possible.

Last week, Target introduced “The Everyday Collection” campaign, where groceries and everyday items are highlighted in unique, funny, and attention-grabbing ways. There were four TV broadcast spots that premiered during the Golden Globes.  A cowgirl dominated diaper duty, while one model took changing a light bulb to whole new heights—both award-winning fetes in our opinion.

But this isn’t where the story ends.  The smart marketing team at Target is hosting a Tweet-to-Runway show—the first-ever online runway show inspired by everyday tweets.   Consumers can tweet about items sold at Target, and Target marketers mine these tweets looking for inspiration for an online show.  Pretty clever and fun way to engage your customer with the brand, I say.

Quick-witted, energetic and amusingly excessive, Wieden + Kennedy’s TV campaign for the Dodge Dart has quietly become one of the most entertaining on the air. Now, agency and client are bringing some of that fresh perspective to the social space with the Dodge Dart Registry, an online program that lets friends and family buy bits and pieces of the vehicle for you—much like a wedding registry allows them to buy you housewares.

The Dodge Dart television spots are great.  They are memorable, believable, and entertaining, but the online registry part of this campaign is what is really clever and smart because it:

BMWi’s “The Future Is Here” interactive piece in NYC is another beautiful example of how robotics (sensors) technologies can be used to create amazing interactive marketing communications in the physical environment.

The grassroots Facebook campaign an IKEA store used to drive awareness of its new store opening, was a clever utilization of what social media offers: rapid information dissemination.  Essentially they used the tag feature in Facebook pictures to get people to tag themselves on items sold by IKEA.  Read the quick summary here. 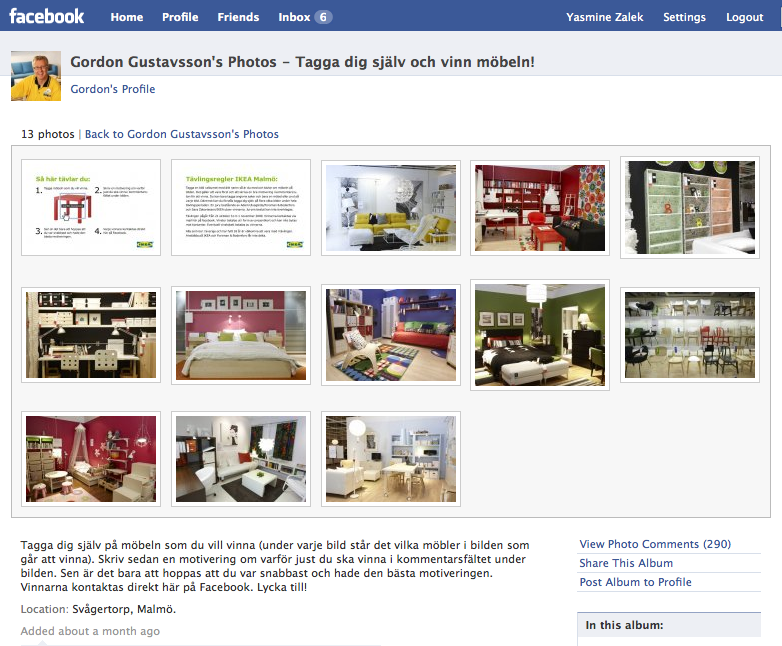 I think this simple campaign by Denny’s is a clever way to keep customers entertained while waiting to eat and to make customers feel like they are getting something special for free.  QR Codes provide this sense of specialness since we cannot see the URL and source of the information directly. For us, it is kind of mysterious, since we are taken directly to the video content.

Marc Andreessen was recently recognized as a Wired Icon and pioneer of the internet.   Given his 20+ year history within the industry as an entrepreneur and now venture capitalist, his perspective has proven to be an insightful one; and so I read the transcript from his interview Chris Anderson.

At one point, Andreessen said something that I think is pretty powerful for innovators and business:

But making it [the internet] easier to use also made it more apparent how to use it, all the different things that people could do with it—which then made people want it more. And it’s also clear that we helped drive faster bandwidth: By creating the demand, we helped increase the supply.

This quote is dense.   It is a comment on multi-sided business models.   It is also a comment on the power of user-centered and service (since we cannot design experiences) design.

Another interesting strategic business lesson to learn came is Andreessen’s comment on why the LoudCloud business didn’t work:

Well, it worked beautifully right up to the point when all the startups went bankrupt, and then all our big clients decided they didn’t have to worry about competing with the startups anymore. After that, it went completely sideways.   ….

So we just went back to basics and we said, OK, we couldn’t make it work as a service provider, but we think we can make it work as a software company, selling the back-end software to manage big networks of servers. We changed our name to Opsware. That ultimately worked, as a business.

On the importance of timing to market adoption and overall success of an innovative product/business:

Andreessen:  We see [social] playing out in retail, where ecommerce is becoming a group activity. Long before Ning, actually, in 1999, I invested in a company called Mobshop, which was Reed’s law applied to commerce, through group sales. It didn’t work back then. But 10 years later, I invested in Groupon, because I could see it was the same idea—finding, on the fly, a group of people who want the same product and using their massive numbers to command steep discounts. …

Anderson: What changed between 1999 and 2009 that made Groupon—and Facebook, and all these other profitable consumer Internet companies—possible?

Andreessen:A big part of it was broadband. Ironically, it was during the nuclear winter, from 2000 to 2005, that broadband happened. DSL got built out, cable modems got built out. So then you started to have 100, 200, 300 million people worldwide on broadband.

How society and culture changes influence success of innovations:

Andreessen: I often wonder if we should have built social into the browser from the start. The idea that you want to be connected with your friends, your social circle, the people you work with—we could have built that into Mosaic. But at the time, the culture on the Internet revolved around anonymity and pseudonyms.

On the power of optimism or the lack of cynicism, Andreessen comments that this is one of the reasons Zuckerberg and Andrew Mason were able to pursue their ideas (i.e. they weren’t burned by the previous dotcom bust).

On which industries are closest on the horizon to being improved by internet technologies:

Andreessen:  The next stops, I believe, are education, financial services, health care, and then ultimately government—the huge swaths of the economy that historically have not been addressable by technology, that haven’t been amenable to the entrance of Silicon Valley-style software companies. But increasingly I think they’re going to be.

On “software expressed as hardware”:

Andreessen:  … There’s a lot of hardware engineering that goes into it, but 90 percent of the intellectual property is software.  So we look at Lytro and we look at Jawbone and we see software expressed as hardware—highly specialized hardware that will be hard to clone.

Today, early Facebook employee and now Quora founder, Charlie Cheer, came to Tepper to talk to us about his entrepreneurial experiences in the web 2.0 space.  He said a lot of interesting things, but one thing in particular I thought was quite smart and different.   When asked how Quora competes with other question-and-answer websites, especially as a late entrant, he said that Quora’s competitive advantage–and I am paraphrasing–

It’s not one big thing, but rather a bunch of little things.

He then went on to give an example of one of these little things that Quora has done with the design of its product; and that’s when I started to believe in my theory that a web-based platform business can not only compete with but beet incumbents with better user-centered design.   This made me then wonder why might this be true?  Are these web-based platform businesses unique from other businesses in this way?  Could any other business enter a market and create better user experiences by simply out-designing the competition?

Fortunately, I had the chance to ask Charlie what his biggest challenge(s) was in running such a web-based platform as opposed to say, a web app that taps into a platform, and he said it was growing the number of users that use the platform.  This of course made sense, and so I wondered, if users are the lifeblood of the platform, and the entire user experience dictates whether users continue using, join, or stop using the platform, shouldn’t we expect these platform businesses, which sometimes depend on network effects, to consistently announce that their competitive advantage will be user experience and product/service design?

All businesses need to care about the experiences of their users/customers, but I think network effect-dependent businesses/products may be uniquely positioned to make a focus on user experience design a market entry strategy against a sea of incumbent players.    This may be especially true given customers/users have such low costs of switching to competing products.

That is, say today, 10 commercials are shown to a pair eyes for a given 30-minute television episode, and one click-through is generated per pair of eyes.    Then, I am saying, that advertisers, in the future, when click-through rates improve to 50%, each pair of consumer eyes will likely be shown more than two ads per 30-minute episode.   Advertisers, content creators, and distribution channels will do this because they will know they can.  They will know that we consumers are happy to sit through 4 ads because 4 ads is still a 60% reduction in ads; not to mention these ads are more relevant to the individual.  So what will happen is total number of click-throughs generated per pair of eyes per 30-minute episode will increase from 1 to 2; and advertisers, content creators, and distribution channels will all be making more money off the same 30-minute long piece of content.

In this future state of the world of media and ad consumption, both advertisers and consumers are happier.

As I understand the state of the art, the artificial intelligence algorithums needed to make the accurate predictions not only already exist, but are considered quite basic now.   What is missing is the data needed by these algorithms to make predictions!

One day, an individual consumer watching TV any day of the week will be like watching the Super Bowl, when we look forward to the commercials; but it will actually be better.   Right now, many people hate ads; but ads actually serve a very useful function of informing us about things we should know about.   The problem with the current advertising system today is that ads annoy us more often then they inform us.   In the future, ads will do a better job of informing us, and will hence be less annoying.